There is no doubt that since the origins of geometry humans have been seduced by the number π. Thus, one of its fundamental characteristics is that it determines the relationship between the length of a circumference and its radius. But this does not stop here, since this constant appears systematically in mathematical and scientific models that describe the behavior of nature. In fact, it is so popular that it is the only number that has its own commemorative day. The great fascination around π has raised speculations about the information encoded in its figures and above all has unleashed an endless race for its determination, having calculated several tens of billions of figures to date.

Formally, the classification of real numbers is done according to the rules of calculus. In this way, Cantor showed that real numbers can be classified as countable infinities and uncountable infinities, what are commonly called rational and irrational. Rational numbers are those that can be expressed as a quotient of two whole numbers. While irrational numbers cannot be expressed this way. These in turn are classified as algebraic numbers and transcendent numbers. The former correspond to the non-rational roots of the algebraic equations, that is, the roots of polynomials. On the contrary, transcendent numbers are solutions of transcendent equations, that is, non-polynomial, such as exponential and trigonometric functions.

Without going into greater detail, what should catch our attention is that this classification of numbers is based on positional rules, in which each figure has a hierarchical value. But what happens if the numbers are treated as ordered sequences of bits, in which the position is not a value attribute.  In this case, the Algorithmic Information Theory (AIT) allows to establish a measure of the information contained in a finite sequence of bits, and in general of any mathematical object, and that therefore is defined in the domain of natural numbers.

What does the AIT tell us?

Where Ti(p) is the Turing machine (TM) i that executes p and prints x, l(p) is the length of p, and K(i) is the complexity of Ti. Therefore, object p is a compressed representation of object x, relative to Ti, since x can be retrieved from p by the decoding process defined by Ti, so it is defined as meaningful information. The rest is considered as meaningless, redundant, accidental or noise (meaningless information). The term O(1) indicates that K(i) is a recursive function and in general it is non-computable, although by definition it is machine independent, and whose result has the same order of magnitude in each one of the implementations. In this sense, Gödel’s incompleteness theorems, Turing machine and Kolmogorov complexity lead to the same conclusion about undecidability, revealing the existence of non-computable functions.

KC shows that information can be compressed, but does not establish any general procedure for its implementation, which is only possible for certain sequences. In effect, from the definition of KC it is demonstrated that this is an intrinsic property of bitstreams, in such a way that there are sequences that cannot be compressed. Thus, the number of n-bit sequences that can be encoded by m bits is less than 2m, so the fraction of n-bit sequences with K(x) ≥ n-k is less than 2-k. If the n-bit possible sequences are considered, each one of them will have a probability of occurrence equal to 2-n, so the probability that the complexity of a sequence is K(x) ≥ n-k is equal to or greater than (1-2-k). In short, most bit sequences cannot be compressed beyond their own size, showing a high complexity as they do not present any type of pattern. Applied to the field of physics, this behavior justifies the ergodic hypothesis. As a consequence, this means that most of the problems cannot be solved analytically, since they can only be represented by themselves and as a consequence they cannot be described in a compact way by means of formal rules.

It could be thought that the complexity of a sequence can be reduced at will, by applying a coding criterion that modifies the sequence into a less complex sequence. In general, this only increases the complexity, since in the calculation of K(x) we would have to add the complexity of the coding algorithm that makes it grow as n2. Finally, add that the KC is applicable to any mathematical object, integers, sets, functions, and it is demonstrated that, as the complexity of the mathematical object grows, K(x) is equivalent to the entropy H defined in the context of Information Theory. The advantage of AIT is that it performs a semantic treatment of information, being an axiomatic process, so it does not require having a priori any type of alphabet to perform the measurement of information.

What can be said about the complexity of π?

The complexity of X can be assimilated to the complexity of x. A priori this approach may seem surprising and inadmissible, since the term K(δx) is neglected when in fact it has an undecidable complexity. But this is similar to the approximation made in the calculation of the entropy of a continuous variable or to the renormalization process used in physics, in order to circumvent the complexity of the underlying processes that remain hidden from observable reality.

Consequently, the sequence p, which runs the Turing machine i to get x, will be composed of the concatenation of: 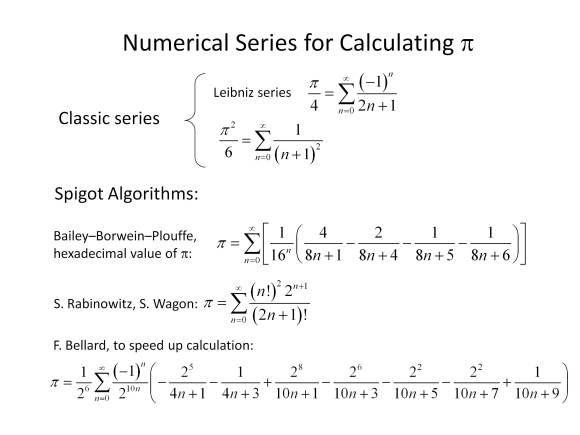 In short, it can be concluded that the complexity K(x) of known irrational numbers, e.g. √2, π, e,…, is limited. For this reason, the challenge must be to obtain the optimum expression of K(x) and not the figures that encode these numbers, since according to what has been said, their uncompressed expression, or the development of their figures, has a high degree of redundancy (meaningless information).

What in theory is a surprising and questionable fact is in practice an irrefutable fact, since the complexity of δx will always remain hidden, since it is undecidable and therefore non-computable.

On the other hand, it is evident that mathematics, and calculus in particular, de facto accepts the criteria established to define the complexity K(x). This may go unnoticed because, traditionally in this context, numbers are analyzed from the perspective of positional coding, in such a way that the non-representable residue is filtered out through the concept of limit, in such a way that δx→0. However, when it comes to evaluating the informative complexity of a mathematical object, it may be required to apply a renormalization procedure.